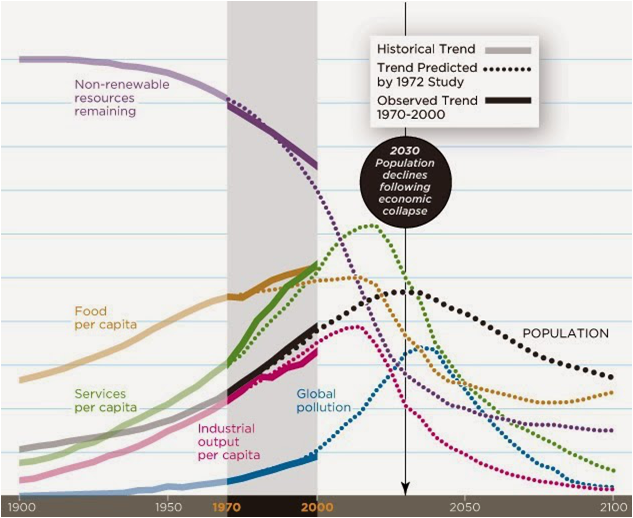 In a previous post (https://cassandralegacy.blogspot.it/2016/03/the-other-side-of-global-crisis-entropy.html  ), I speculate that thermodynamic systems such our industrial economy, are completely dependents from theirs “outside”. As our economy grows and incorporates this “outside”, it is obliged to store high entropy inside itself.   Possibly, the epidemic diffusion of riots in the very heart of the global system is an indicator of this predicament. 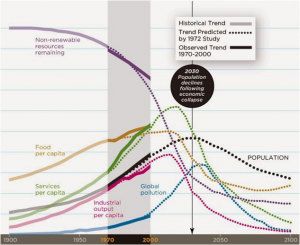 Here, I will try to discuss another aspect of the same topic.   I mean the fact that, apparently, we are unable to do anything to avoid global collapse, despite our deep knowledge of Natural laws and our incredibly powerful technical means.
40 years after the publication of “Lilts to Growth”, we discover that we have realised nothing less than the basic scenario, Business as Usual, and with a disturbing accuracy level.   In fact, in the intentions of the authors, the Business as Usual scenario was not a forecast, but just one scenario among others, useful to analyse how the system works and changes, following different strategies and  availability of resources.    But the real world itself has changed this scenario among others into an authentic prophecy .

How was this possible?

It could be that we have done nothing to change our policy and economy, but this is hard to believe.   In the past 40 years we have seen a number of major changes and all of them in a way that was completely unpredictable in the beginning of the Seventies.   For instance, the partial collapse of the Soviet  Union, the rise of China to the level of the second planetary power, the globalisation and financialisation of economy, Internet, the Euro and so on.   The Meadows and their staff could not have incorporated all this into their model, simply because they could not imagine anything similar.   So we are forced to think that such epochal happenings have been marginal accidents in the evolution of the global socio-economic system.

To get a better understanding, I think it is best to start by considering Word3 itself.   In a post of sometime ago, prof. Bardi showed that, behind its complexity, Word3 has a very basic thermodynamic architecture.   It is a system that builds up and stocks information, with a positive retroaction to the inside flow .   The larger the system is, the more it is able to extract low entropy from the wells and throw high entropy inside the sinks. 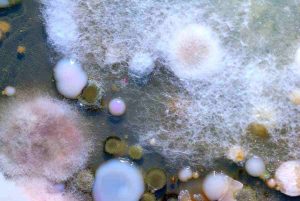 In other words, the BAU scenario more or less describes the activity of mildew inside a Petri dish.
First of all, it starts to exploit the very best resources (for instance: sugar) and so it grows.   As it grows, it needs more resources and thus it starts to digest everything available and, at the same time, it evolves as fast as possible in order to implement its efficiency in the exploitation of increasingly rare and poor resources.   This until, at the end, it digests itself and dies.
Now the question is: how is it possible that with all our intelligence, science and technology we act just like mildew inside a Petri dish?   And what about our freedom of choice?

Regarding the first question, I suggest that in 1970, at a global level, the socio-economic system had already overshot the Earth’s carrying capacity.   My idea is that a system may have a certain degree of freedom, which declines exponentially as it reaches its limits.   This means that, far from the limits, systems can change their trajectory and, the farther the limits, the more  choices are possible.   But as a system impacts with its limits, simple and brutal physic dynamics become the only possible evolution and nothing can change it.

For example, a boy can choose his job.   Sure, there are always severe limits depending on his geographical location, economic and social status, culture and so on.   But the degrees of freedom  are anyway more numerous than  zero.   For instance, he can choose to be a soldier, a taxi driver or an employee.    But if a 50 year old man loses his job, the only thing he can do is to slice his bread as thin as possible.   If he was an employee, he will never have a taxi licence or he will never be enrolled as a contractor in Libya.

I presume that my hypothesis is consistent with physics and also with historical data.   Many, if not all, extinct civilisations have disappeared because of foreign invasion or collapsing in a typical “Seneca Cliff” trajectory.
Many historians have investigated this astonishing phenomenon: Vico, Toynbee, Spengler, Tainter, to mention only the more prominent scholars.   Each proposed a different set of causes for the collapse of civilizations, and all of analyzed important aspects.   Possibly, the effect of dissipative structures dynamics is the underlying  physic of this historically recurrent event.

To me, this hypothesis is consistent with ancient wisdom too.   Mythology and epic are full of examples in which the hero has the possibility to change an adverse fate, but only until he (or she) is far from the accomplishment of such a fate.   To cite an example, Hector had three times the opportunity to put an end to the war, but each time he refused to do so because he was winning and wanted to push forward.   He was sure that  the destruction of the Achaean fleet would mean the end of the hostilities, but we know the story went differently.  He eventually understood his miscalculation, but by that time it was too late: Achilles was standing in front of him. 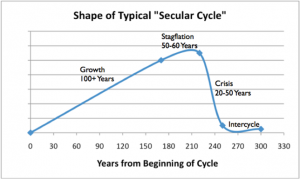 Shape of typical Secular Cycle, based on the work of Peter Turchin and Sergey Nefedov in Secular Cycles. Chart by Gail Tverberg.

Possibly, at a socio-economical level we have a similar situation: as long we are growing, we can choose to halt the growth.   But once the overshoot arrives, we can only follow the intrinsic thermodynamic of the system.  Usually, this means an extra growth dragged by system inertia, followed by a more or less troubled downsize.