Entropy and the collapse of civilization 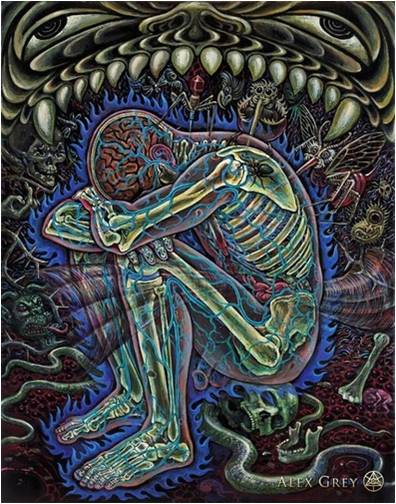 When we discuss the impending crisis of our civilisation, we mainly look at the resources our economy need in a growing quantity. And we explain why the Diminishing Returns of resource exploitation pose a growing burden on the possibility of a further growing of the global economy. It is a very interesting topic, indeed, but here I suggest to turn 180 degrees around and take a look at the “other side;” that is to what happens where the used resources are discarded.

Eventually, our society (as any other society in history) is a dissipative structure. It means that it exist only because it is able to dissipate energy in order to stock information inside itself. And there is a positive feedback: more energy permits to implement more complexity; and more complexity needs, but it also permits a larger energy flow. This, I think, is a crucial point: at the very end, wealth is information stocked inside the socio-economic system in different forms (such livestock, infrastructures, agricolture, machines, buildings, books, the web and so on).

Human population is peculiar because itself  is a large part of the information stocked inside the society system. So, from a thermodynamic point of view, it is the key part of “wealth”, while from an economic point of view people can be seen as the denominator of the global wealth.   The accumulation of information inside a system is possible only by an increment of entropy outside the same system. This is usual with all the dissipative structures, but our civilisation is unique in its dimension. Today about 97% of the terrestrial vertebrate biomass is composed of humans and of their symbionts and we use about the 50% of the primary production (400 TW?), plus a little less than 20 TW we have from fossil fuels and other inorganic sources.

At the beginning, our modern civilisation performed in the same way that all the others in the history: appropriating energy forms such food, livestock, commodities, slaves, oil, carbon and so on. And throwing entropy to biosphere in different forms such as pollutants, ecosystems transformations, extinctions, heat and so on; while throwing entropy to other societies as war, migration, etcetera.

As the industrial economy overruled and substituted all the others, it became the only one economy in the world. And so, necessarily, found more and more difficulties to dissipate energy outside itself .   In practice, sinks become problematic before wells do. But remember that in order to implement its own complexity, a dissipative system needs a growing energy flow, that is it needs cornucopian energy wells.

Today, both global pollution and massive immigration into the more industrialized countries evidence that our system is no more able to expel entropy out of itself simply because there is less and less “outside”. But if entropy is not discharged out of the system, it necessarily grows inside it.   And when there is more energy, there is more entropy in a typical diminishing returns dynamic.   Maybe, we can see here a negative feedback which has stopped the economic growth and that will possibly crash the global economy in some decades.

If this reasoning is correct, the political and the economic crisis, social disruption and, finally, failing states are nothing less than the visible aspect of the growing entropy inside our own meta-system. Eventually, global society is so large and complex which is articled in many correlated sub-systems and we are managing in order to concentrate entropy inside the less powerful ones: some yet problematic countries, lower classes and, especially, young people. But these phenomena produce political shifts, riots and mass migrations to the core of the system. This means that also the elites have lost the capability to understand and/or control the internal dynamic of the global socio-economic system.

In the meantime, the overloading of the sinks is starting to cause the deterioration of the wells. It is evident, for instance, with air and water pollution, ocean acidification, mass extinction, ecosystems disruption, and much more. At the end, as the economy grows, the global system necessarily looses the capability to dissipate energy, condemning itself to disruption.

We can find the same phenomenon at smaller scales, such as for a single organism, such as a single human being. If a good energy flow is available in the form of food and heat, a baby can develop into a strong and healthy adult. Good flows of energy during adult life mean a better life and the possibility to develop culture, skills, art, science and a to keep one’s health for a long time. Insufficient energy means starvation and illness. But it is also true that if the body absorbs a quantity of energy larger than its capability to dissipate it, then we have are problems such fat, illness, obesity and, finally, a bad life and premature death.

We found the very same phenomenon at larger scales as well. The Earth as a whole is also a dissipative, complex system. It does not have any problems with its main energy well: the Sun. We can be sure that the 86.000 TW that we receive from the sun on the average are not going away, although they will gradually increase over very long time spans. But the whole biosphere is collapsing in one of the most serious crisis it ever faced during the 4,5 billions years of its history. This crisis is the result of the human activity that reduces the capability of the ecosystem to dissipate the energy input, in particular as the result of the greenhouse effect caused by the combustion of fossil fuels.   So the internal entropy grows with the consequence of harming even more the ecosystems and reducing complexity. Possibly leading to a global disaster at a geological scale.

In conclusion, I suggest that, in the coming decades, entropy will be a much challenging problem than that of the energy supply. Only a drastic reduction in the energy input could save the biosphere. But this is a high price to pay because a reduction of energy flow means necessarily a reduction of complexity and information stored inside the human sub-system. It means misery and death for the present human population, although it means also hope for the future one (assuming that it will exist, but humans are too adaptable and resilient to go extinct as long as a functioning biosphere exists).   So, new civilizations will appear but, in order for that to occur, the present civilization will have to collapse fast enough to leave a livable planet to our descendants. 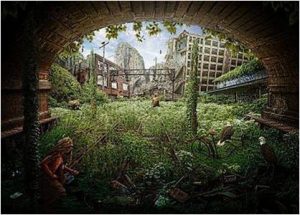